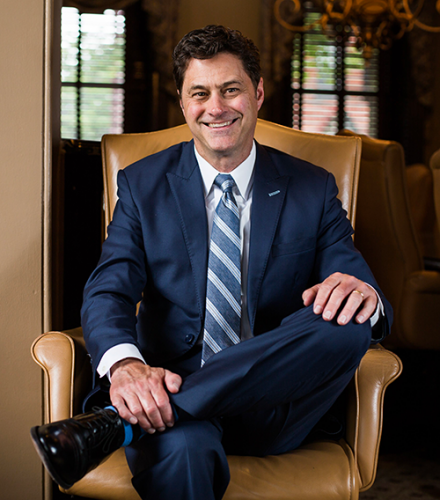 In 1992 Tom was hired as a prosecutor for the Chester County District Attorney’s Office where he tried a wide variety of misdemeanor and felony cases including murder, rape, assault, robbery, theft, drug delivery, and possession. In 1993, he was assigned to a relatively simple case involving a dispute between neighbors. The attorney representing the defendants was a young sole practitioner named Stan Luongo. The two lawyers struck up a long-lasting friendship and eventually founded their firm, LUONGO BELLWOAR LLP.

Tom left the DA’s Office in 1997 and began a legal practice that initially focused on representing people charged with criminal wrongdoing. His former position as an Assistant District Attorney provided him with valuable insight into the inner workings of the court and criminal justice system, insight he employs every day when handling cases. Tom represents people who have been arrested, cited, questioned, investigated or charged in connection with a crime in Chester, Delaware, Montgomery, Berks, Lancaster, and Philadelphia Counties as well as in Federal Court in Philadelphia. He is a member of the Chester County Bar Association and the Pennsylvania Association of Criminal Defense Lawyers. Since 1998, he has been a select member of the Federal Criminal Justice Act Panel of attorneys handling serious cases in Federal District Court in Philadelphia.

Over the years, Tom’s practice has shifted and evolved into representing victims of crime in civil lawsuits. He has successfully sued nursing homes, apartment complexes, bars, restaurants, hotels, religious institutions, and individuals who enable criminal activity resulting in physical and emotional injury to others. Tom’s tireless dedication to helping victims obtain justice has resulted in multi-million dollar recoveries for his clients against several national and international companies and forced change in the way they do business. Tom is a member of the National Crime Victim’s Bar Association (NCVBA) and has been a presenter on their behalf at the Civil Justice for Victims of Crime in Pennsylvania symposium for victim advocates, law enforcement and prosecutors. The event was co-sponsored by the PA Commission on Crime and Delinquency, The Office of the Commonwealth Victim Advocate, The PA Coalition Against Rape, and the PA Coalition Against Domestic Violence. Tom is also a regular attendee and contributor to the NCVBA annual conferences in Los Angeles, Philadelphia and most recently, Orlando.

Tom also practices property tax, personal injury & bankruptcy law. In 2015, 2016, 2017, and 2018 Main Line Today recognized Tom as a top attorney. He lives in the West Chester, PA area with his wife, and their two children.

“Tom, Stan and Nichole were there for me and my husband throughout a very long and protracted civil lawsuit that they filed on our behalf.

They had patience and perseverance throughout the nearly 3 years of litigation that we went through. When I was ready to throw in the towel, they gave me guidance I needed, and most of all showed me that I had the strength to persevere through the difficult times.

The positive outcome I had from the litigation is a testament to the tenacity of all 3 of these highly professional, compassionate, and skilled attorneys and paralegal.

I am so glad that I was referred to them, and I now have my own personal law firm for anything that I may need! I highly recommend them!”

Our friendly and professional lawyers and staff are here to answer any questions you may have about our law firm or the services we provide. Talk with us today.