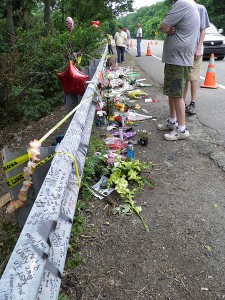 The parents of the passenger killed in a fatal drunk driving accident in the summer of 2011 are suing the dead driver and actor Ryan Dunn’s estate for wrongful death.

The MTV Jackass star crashed his Porsche in June 2011 killing himself and his passenger Zachary Hartwell. Mr. Dunn, 35, and Mr. Hartwell had reportedly been at a West Chester bar before crashing into the woods of a Philadelphia suburb. Mr. Dunn’s toxicology report revealed that his blood-alcohol level was .196 at the time of the crash. Pennsylvania’s legal limit is .08. Additionally, Dunn was reportedly driving at speeds up to 140 mph in a 55 mph zone.

In August 2012, George and Erma Hartwell filed a suit against Mr. Dunn’s estate. The parents are also seeking damages from Barnaby’s West Chester, the bar Mr. Hartwell and Mr. Dunn had been drinking at before the accident. The family wants Mr. Dunn’s estate to cover costs associated with the death of Mr. Hartwell, including funeral costs.

The lawsuit has not been settled at this point.