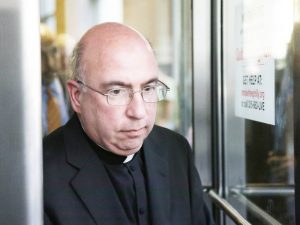 Reverend Andrew McCormick has been to trial twice over allegations that he sexually molested an altar boy in a Philadelphia parish 18 years ago. Both times, juries failed to reach a verdict. Now, the alleged victim is turning to the civil court to seek justice. The now-27-year-old listed as John Doe on the lawsuit is suing McCormick as well as the Catholic Archdiocese of Philadelphia.

The lawsuit seeks unspecified compensatory and punitive damages for emotional and other injuries suffered by the alleged victim over time. According to the attorney who filed the lawsuit, Brian D. Kent, this is about more than receiving compensation for his client — it’s about protecting other children. He says that because two juries have failed to convict McCormick, a civil lawsuit is his only way to hold McCormick accountable for his actions. Because the standard of proof is lesser in a civil case than a criminal case, John Doe’s chances could be better.

Some Background on the Case

McCormick was originally charged in the John Doe case in July 2012. The former altar boy accused him of trying to force the boy to commit a sex act in McCormick’s rectory bedroom at St. John Cantius parish in Bridesburg in 1997. At the time of his arrest, McCormick was pastor at Sacred Heart parish near Bridgeport and had already been forbidden to publicly practice his clerical duties. He was suspended in March 2011, along with 26 other priests, for inappropriate conduct with children.

In his first trial, it was found out that McCormick had been disciplined twice for allowing young boys into his room. He had also been investigated in 2004 by a Philadelphia County grand jury for questionable conduct with minors. Still juries on the Doe trials could not come to a verdict.