Pennsylvania Law: Homicide by Vehicle While DUI is Very Serious 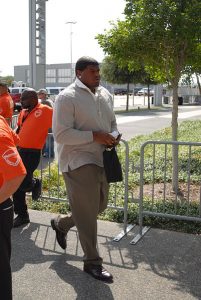 Josh Brent, nose tackle for the Dallas Cowboys, is being charged with intoxication manslaughter after his December 8 car accident that took the life of teammate Jerry Brown. The accident took place at approximately 2:30 a.m. in Irving, Texas when Mr.Brent’s car was allegedly traveling at high speed on State Highway 114 before he hit the curb and flipped the car.

Mr. Brown, 25, was rushed to the hospital and pronounced dead upon arrival. If Mr. Brent, 24, is found guilty, he could face up to 20 years in prison.

If Josh Brent was a member of the Philadelphia Eagles instead of the Dallas Cowboys, and was arrested in Pennsylvania for the December 8 accident that took the life of his teammate, he most likely would be charged with Homicide by Vehicle While Driving Under the Influence, 75 Pa. §3735.  Homicide by Vehicle while DUI is graded as a felony of the second degree and carries a maximum prison term of 10 years and a maximum fine of $25,000.  However, if a driver is convicted of this charge, the law requires a mandatory minimum jail sentence of 3 years for each victim whose death is a result of driving under the influence.

Homicide by Vehicle while DUI is very serious, but a driver in Pennsylvania can also be charged with Homicide by Vehicle, 75 Pa. §3732, if other types of unsafe driving practices not related to DUI result in the death of another. For example: if someone is engaged in street racing, reckless driving or other similar unlawful unsafe driving practices that result in a fatal accident.  Homicide by Vehicle is graded as a felony of the third degree and although it does not carry a minimum mandatory term of imprisonment, lengthy jails sentences after conviction are not uncommon.

Suppose Josh Brent’s actions didn’t cause the death of his friend and teammate but rather severely injured him or another person.  In that instance, under Pennsylvania law, he could be charged with Aggravated Assault by Vehicle While Driving Under the Influence, 75 Pa. §3735.1.  To be convicted of this offense, the driver’s negligence must have caused serious bodily injury as a result of driving under the influence.  This crime is a felony of the second degree and, like Homicide by Vehicle, can carry stiff jail terms upon conviction.

Our law firm has handled many cases where a client was alleged to have caused the death or serious injury of another due to negligent, reckless or intoxicated driving.  It is important that you engage an experienced attorney to represent you at every level of the criminal proceedings.  Luongo Bellwoar, LLP, offers a free consultation to assist you in what is likely the most difficult time of your life. Please call if you’d like us to help you.