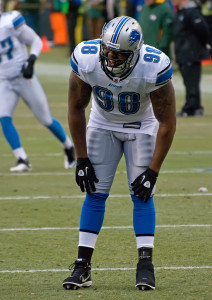 Detroit Lions defensive tackle Nick Fairley was sentenced on July 31st to a suspended 6 month jail term and one year of probation from a 2012 DUI and reckless driving case.

The football player was at training camp rather than the courtroom for his sentencing. His attorney said he did not inform his client of the Thursday morning sentencing. However, assistant district attorney Spiro Cheriogotis said that the judge was clear that Fairley was supposed to be present during sentencing. The judge decided that he was not a flight risk, so sentenced Fairley although he was not in attendance. Because his sentence is suspended, Fairley will be able to play in the upcoming NFL season. Additionally, he will have to pay $750 in court fees and was assigned to two classes — one for each charge. Apparently, one of these classes is driving school.

Fairley was arrested in May 2012 for driving under the influence in Alabama, his home state. Over that Memorial Day weekend, he was driving under the influence of alcohol at a speed of 100 m.p.h. Allegedly, he had tried to elude police. It was his second arrest in a span of two months. That April, he was cited for possession of marijuana but the charges were dismissed after Fairley passed a drug test.

For more information, check out this article by the Detroit Free Press.