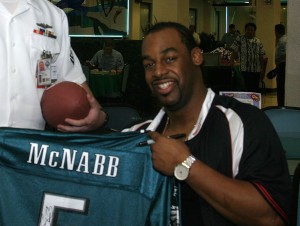 By now, you’ve probably heard that the former Philadelphia Eagle Donovan McNabb was arrested in Arizona on June 28 on suspicion of driving under the influence — his second DUI arrest in 18 months.

The police report stated that McNabb’s vehicle rear-ended the car of a police officer’s wife. When police arrived, they noted that McNabb appeared impaired. One officer reported smelling a fruity odor on his breath and noticed watery eyes and slurred speech. When McNabb was asked if he’d been drinking, he told police he hadn’t but did take some cough syrup for a cold. Now that the results from his blood test are in, it appears his BAC was more than double the legal limit at 0.17. For more on the arrest, read the full story from ESPN.

What if you get stopped for DUI?

If you’re ever pulled over, whether on suspicion or at a DUI checkpoint, the experience is certainly nerve wracking. Even if you haven’t been drinking, sometimes you can get so nervous that you do appear intoxicated. However, knowing what to do in that type of situation can certainly make things go smoother. Be sure to check out our “What to do if you are Stopped for DUI” post.

Especially if you are stopped in Chester County, it’s important to know if the officer’s car had a dash cam when you were pulled over. Most police vehicles in Chester County now do have dash cam, and they can play a big part in the case if you are charged with DUI. Make sure that your lawyer knows which precincts utilize dash cams before carrying forward with the case.