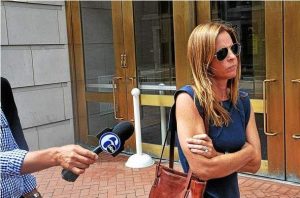 A female guidance counselor at a Chester County private school is accused of pursuing a 16-year-old student for sex, even promising him admission to Harvard University in exchange. Emily Feeney, 40, had no comment for reporters as she turned herself in last week. Feeney worked as swim coach and Director of College Counseling at Malvern Prep for two years. According to District Attorney Tom Hogan, she has since been fired from both positions.

The teen victim told police that Feeney had been sending him inappropriate texts and emails since 2014, when he was only 16 years old. Investigators claim that at one point, she went so far as to kiss the boy. The District Attorney’s office stated that some of the messages included topless photos of Feeney. Other messages allegedly sent by Feeney read, “I adore you – always have, always will,” and “You can either start talking to me again and respond to me or we can discuss it in my office Monday. If you ever cared about me, please don’t shut me out. It’s too painful.”

The victim told investigators that he made it clear to Feeney several times that he wasn’t interested in her advances. Despite his disinterest, she continued in her attempt to win him over, claiming that she could use her connections to get him into Harvard. According to 6 ABC News, she even forwarded an email from Harvard that discussed the teen being a candidate for the swim team saying, “you owe me big time.” After a search warrant, hundreds of emails were recovered from Feeney’s work email account. She is charged with Institutional Sex Assault, Unlawful Contact with a Minor, Corruption of Minors and Indecent Assault, and was released on $7,500 bail.

Sexual Assault of a Minor

As we have recently been seeing in the news, sexual assault of a minor is not only confined to males. Although reports of this type of abuse has historically been against mostly male predators, sexual abuse involving minors often has more to do with a position of authority rather than gender. Predators, like Emily Feeney, use their power to manipulate minors to perform acts against their will. In these cases, the minors are especially vulnerable because the adult is an authoritative figure in their lives and repercussions of not following their demands often seems severe.

“When it’s happening between a 40-year-old adult and a 16-year-old child – with that difference in power and authority – that is the sort of sexual abuse that we worry about,” said District Attorney Tom Hogan. In another statement, Hogan said, “As schools prepare for the start of classes this serves as an important reminder that certain safeguards should be in place to protect students. Schools should have policies to limit communications between teachers, coaches, and students to officials’ school matters on school accounts that can be monitored. There should be no contact between teachers/coaches and students on private email accounts or social media. We have repeatedly seen cases where inappropriate communication between teachers/coaches and students have evolved into sexual assaults.” For more on this story, see the article by Main Line Media News.

For more information on what to do if you or your child has been a victim of child sexual abuse, please refer to the PA Crime Victims Civil Justice Guide.