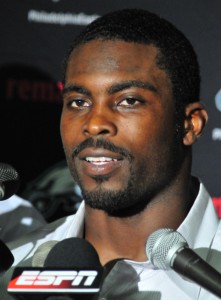 In the midst of a scandal that landed him in prison, NFL player Michael Vick filed for Chapter 11 bankruptcy in 2008. At the time, he was making 12 cents an hour mopping prison floors and had accumulated nearly $18 million in debt. Today, he has paid off the majority of that sum by living off of a restrictive budget since his release in 2010.

Although living on a salary of $300,000 a year may sound luxurious to most of us, it’s interesting considering Vick has earned $49 million over the past five years. Also, Vick wasn’t required to live this way. According to the vice president of a liquidating trustee company in his bankruptcy, he could get away with paying just 10 or 20 cents on the dollar but Vick wanted to pay in full.  He could have filed for Chapter 7 bankruptcy and had much of his debt forgiven. Vick told ESPN that he felt it would be wrong to “stiff people who never stiffed him.” Perhaps this NFL player’s sentence actually had a positive impact on his life.

Michael Vick served 548 days beginning in 2008 for taking part in an illegal dog fighting ring. At the time of his sentencing, it was unclear to many if Vick would ever see the field professionally again. Although he hasn’t quite made it back to his pre-prison standards, he’s had contracts with Philadelphia Eagles and New York Jets since his release.

Despite this being an extreme case, we hope this story brings hope to those encountering their own bankruptcy struggles.