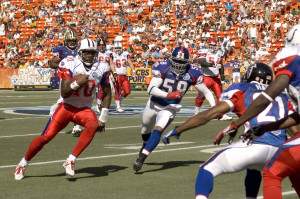 During the second week of February, 2017, Young’s lawyer filed a petition for Young in a Houston federal bankruptcy court.

These days, Young is attempting to restart his NFL career and is hopeful that he will be recruited to a new team.

In 2006, Young was a first-round draft pick for the Tennessee Titans. As a rookie starter, he led the Titans to a 26-20 victory over the Texans and was even selected to go to the ProBowl. Just two years later, he suffered a knee injury and lost his starting position. Now, he’s filing for Chapter 11 bankruptcy.

Young’s financial troubles seem to have begun during the 2011 NFL lockout. During that time, a $1.9 million loan with a 20 percent interest rate was secured from Pro Player Funding in Young’s name.  The interest on this loan has now grown to $2.5 million, and Pro Player won a suit to force repayment. Immediately, Young sued a group that included his former financial adviser, Ronnie Peoples, who Young claims obtained the loan but never gave him access to the funds. Young’s attorneys believe this loan may be what pushed the athlete into this unfortunate financial situation.

Over his six seasons in the NFL, Vince Young was paid $34 million. He has not played in a regular season game since 2011 and was released by the Philadelphia Eagles, Buffalo Bills, and Green Bay Packers between 2011 and 2013. According to the Houston Chronicle, Young’s 2013 assets were listed as $1.8 million and $2.5 million in liabilities.

Unfortunately, Young appears to have fallen into the same trap as many other professional athletes after making a multi-million dollar salary. The problem seems to be that athletes expect to have this high income for years, and when it suddenly stops they cannot keep up with their high expenses. The Chronicle article refers to a study cited by Sports Illustrated in 2009, that says that 78 percent of former NFL players are bankrupt  within two years of retirement, and 60 percent of former NBA players are bankrupt within five years of retirement.

For help with your own bankruptcy case, visit our Bankruptcy Lawyer page.