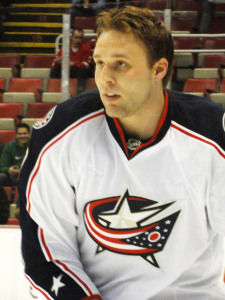 This year, the Columbus Blue Jackets will pay defenseman Jack Johnson $5 million. The 27-year-old has been in the league for nine years, making over $18 million. Additionally, he’s still being paid from the seven-year $30.5 million contract he signed with the LA Kings in 2011. So, why did this NHL player just file for bankruptcy? We might be better off asking his parents.

At the moment, Johnson owes over $10 million in debts, has recorded assets of less than $50,000, and has reportedly been sued multiple times for the amount of $6 million. Johnson’s mother Tina apparently borrowed over $15 million in her son’s name against his future earnings. She took out as many as 18 loans that resulted in a series of defaults. On top of the borrowing, both of Johnson’s parents allegedly bought themselves cars and spent nearly $800,000 on property improvements. It seems as though much of this was done without their son’s permission.

According to a source quoted on For the Win, Johnson confronted his parents about debt collectors contacting him and they told him not to worry. Now, Johnson has severed ties with his parents and hired a new bankruptcy attorney. His hearing will take place in Los Angeles in late January.