The Pope Apologizes to Abuse Victims 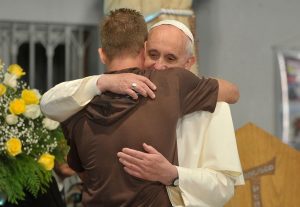 In an unprecedented move on Monday, Pope Francis promised 6 victims of clergy abuse that Catholic bishops would be held accountable for failing to protect children, and acknowledging that the covering  up of these crimes can be just as harmful as committing them.

According to a statement released by the Vatican, the pope said the following in his homily during a private mass with the victims: “I beg your forgiveness, too, for the sins of omission on the part of Church leaders who did not respond adequately to reports of abuse made by family members, as well as by abuse victims themselves.”

The group of victims consisted of three men and three women, all from Britain, Germany, and Ireland. In addition to the mass, they were each able to speak privately with Pope Francis for 30 minutes in his residence. Although the meeting has been criticized by some as a publicity stunt, Vatican spokesman Rev. Federico Lombardi said that anyone who saw the victims leave the meeting would have no doubts that they had an authentically moving experience. For some, just having the opportunity to feel heard and respected could be therapeutic after years of having the abuse ignored.

Since becoming pope last year, Francis has also appointed individuals to the Commission of the Protection of Minors, a group to advise him on how to move the Church past the sexual abuse controversies. One of the women on this commission was a victim of clergy abuse.

For more information on this story, take a look at the article published on CNN.