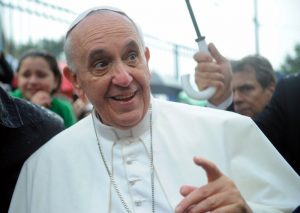 Following last week’s comments that Catholic Bishops showed “courage” during the church’s sex abuse scandal, Pope Francis met with survivors of abuse and made statements that give rise to hope for change within the church.
“It continues to overwhelm me with shame that people who were charged with taking care of these tender ones violated that trust and caused them a profound pain… God weeps” the Pope stated to a room full of Bishops at St Charles Seminary.
Pope Francis’ comments were in contrast to those made last week that seemed to comfort and praise Catholic bishops who oversaw and covered up the priest sex abuse scandal and failed to address the real victims – survivors of abuse at the hands of those priests.

Click here for the full story on Pope Francis recent meeting with sex abuse survivors and his comments condemning the past actions of the church.