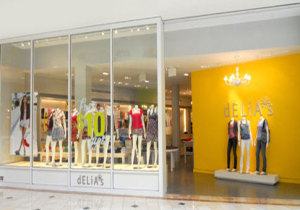 In the 1990’s, the clothing chain Delia’s was all the rage among teenage girls. They marketed their items in a catalogue that doubled as a fashion magazine, and seemed far ahead of the curve and other retail competitors. According to Mary Brett Whitfield, a senior vice president for industry consulting firm Kantar Retail, Delia’s failed to innovate when competitors began offering similar services.

Delia’s announced that it will file for Chapter 11 bankruptcy protection “in the very near term,” and is looking for approval to close all stores and distribution centers. Delia’s has entered an agreement with Hilco Merchant Resources LLC and Gordon Brothers Retail Partners LLC to liquidate all assets, including fixtures and equipment. Today, shares sank to just 1.9 cents.

The company has reported a loss in each of its last five fiscal years, and says it has experienced lower than average mall traffic and slow website orders. According to Bloomberg.com, Delia’s received several inquiries about mergers, takeovers, and equity financing, but none were example.

Such an announcement is unusual right before the holidays, as most retailers would wait to see enough from seasonal sales to stay in business. However, if you visit the Delia’s website today, you’ll see advertisements for their “All Stores Closing” sale. All merchandise online and in stores is 40%-60% off.