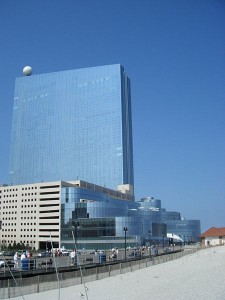 Last month, we reported that the Atlantic City casino Revel had filed for Chapter 11 bankruptcy.

Now the casino has unveiled their new plan to get back on track. The biggest criticisms have been that many of the services that Revel offers are not well priced and do not accommodate the vast amount of Atlantic City visitors that come just for the day.

So, what has caused the casino to end up in so much debt?

According to casino analyst, Steve Norton,

The substantial construction cost of Revel, the loss of 1,900 of their rooms, the general collapse of the economy, the U.S. unemployment problem and new gaming options in Pennsylvania and New York — all causing a 40 percent decline in casino revenues — are the primary reasons for Revel’s failure….”

According to an AP article there are a number of  reasons that Revel is in financial crisis, including:

Construction mistakes alone are responsible for much of the debt. Dennis Stogsdill, Revel’s chief restructuring officer, reports that $100 million of lost money can be blamed on a contractor. When the project ran of money halfway through the construction, the casino failed to receive its second tower, which would have benefited sales.

Revel’s initial marketing efforts were not well executed. It created an expensive as which featured a model disappearing into a suitcase, roasting a cupcake with a blowtorch, and a poolside guest wearing a bizarre mask. It likely created more confusion than anything. Plus,  Revel doesn’t offer a players’ club that other area casinos have.

Revel is one of the pricier Atlantic City options. In addition to high priced rooms, the hotel’s food and drink options are also more expensive. In order to keep up with the competition and attract visitors that aren’t visiting on the company credit card, the caino needs to align its prices with competition better.

The casino says it plans to exit bankruptcy court by May 30. The restructuring will eliminate 82% of the casino’s 1.5 billion debt, leaving a $272 million debt.